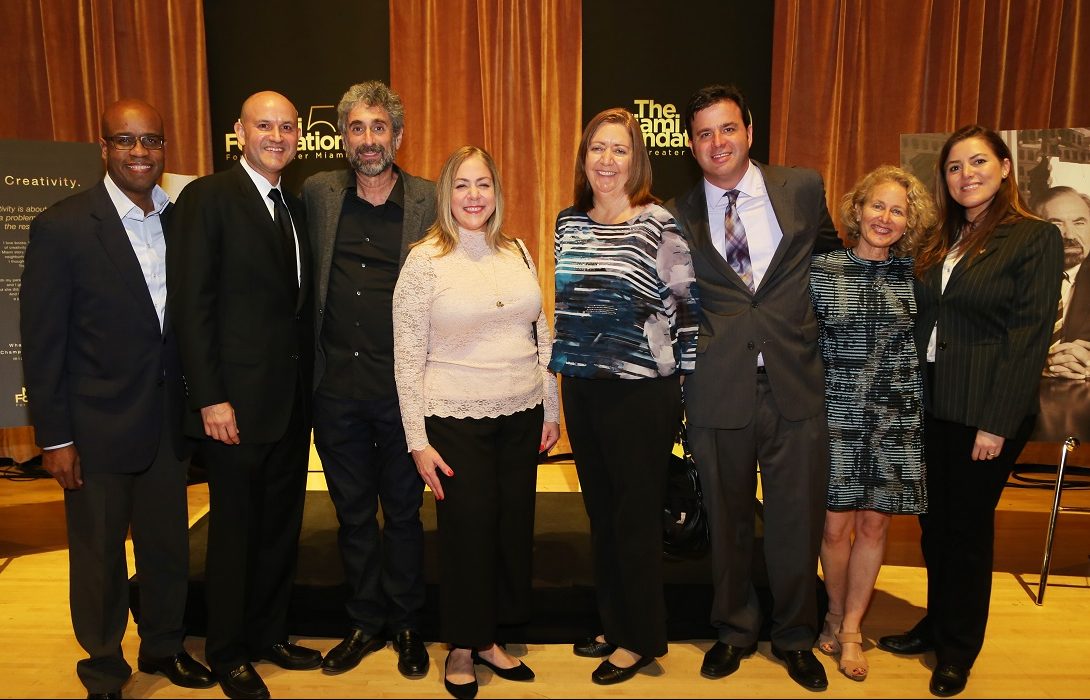 Posted at 20:41h in News by The Miami Foundation 11 Comments
Share

Greater Miami is booming with arts, culture offerings and creative people crafting their own, unique livelihoods through a wide spectrum of pursuits. As they shape Miami’s cultural, social and economic vitality, The Miami Foundation recognized that helping artists build community has become essential.

As part of its 50th Anniversary celebration on Wednesday, November 29, at the Adrienne Arsht Center, The Miami Foundation celebrated six arts and culture organizations that stand out for creating experiences that build community. The Foundation’s “Creativity” event showcased local talent and spotlighted nonprofits that received $50,000 each, or a total of $300,000, as part of The Miami Foundation’s 50th Anniversary Signature Grants.  This investment provides resources to nonprofits developing spaces where “creatives” can pursue new ideas, products, technologies and social solutions. The event was the culmination of a year in which the Foundation has made $1 million of signature philanthropic investments in Miami nonprofits.

Miami’s music scene was front and center as the 150 attendees enjoyed performances by the Miami Arts Studio student a cappella group, The French Horn Collective and Yoli Mayor of “America’s Got Talent” fame. Rick Schatz, The Miami Foundation’s board chair; Javier Alberto Soto, president and CEO of The Miami Foundation; and Jorge M. Pérez, chairman and CEO of The Related Group, gave remarks on how the arts shaped Miami’s past, present and future.

“To create a truly prosperous community, we must strive to make equity a priority,” Soto said. “Each of our grant recipients were selected because they are using the arts and creative spaces to break down barriers in our community and to bring people together across geographic, racial, ethnic and economic lines.  Doing this builds understanding and empathy in ways that are key to the development of an equitable and just society.”

Soto announced the $300,000 in signature grants to the following nonprofits:

– Adrienne Arsht Center: The Arsht Center leads Miami in tackling community challenges through the arts. As it enters its second decade, the Center is poised to magnify its impact on the Miami community, activating a public town square as a space where creatives can connect and dream together.

– Guitars Over Guns: GOGO is building the lives of youth through music and the arts and mentorship. Since launching in 2008, they’ve served more than 2,000 local youth – 99 percent of whom have been promoted to the next grade and graduate on time.

– Miami Book Fair  (staff and board pictured above): For over 30 years, Miami Book Fair has been one of Miami’s flagship cultural traditions. As its motto says, it is “Building Community: One Reader at a Time.” Beyond the annual eight-day festival, the Fair hosts a variety of year-round programming in English, Spanish and Creole.

– New World Symphony: Since its founding, New World Symphony has launched the careers of more than 1,000 musicians through its fellowship program. With the symphony’s outstanding programming and opening of New World Center and SoundScape Park, it has brought a new cultural vitality, contributing to Miami’s reputation as a world-class destination for the arts.

– O Cinema: The community-based arts house has created a space showcasing films that would otherwise not be shown in Miami and opportunities for the city’s diverse communities to see themselves reflected on screen.

In 2017, $1 million in 50th anniversary signature grants went to organizations with a legacy of innovation and success in both tackling Greater Miami’s most pressing challenges of the past and helping mold a prosperous future. In January, the Foundation announced grant recipients celebrating its Legacy; in June, recipients creating Opportunity for residents; and in October, recipients ensuring Greater Miami’s Resiliency – each nonprofit organization received at least $50,000 to continue expanding their work and the number of residents they serve.