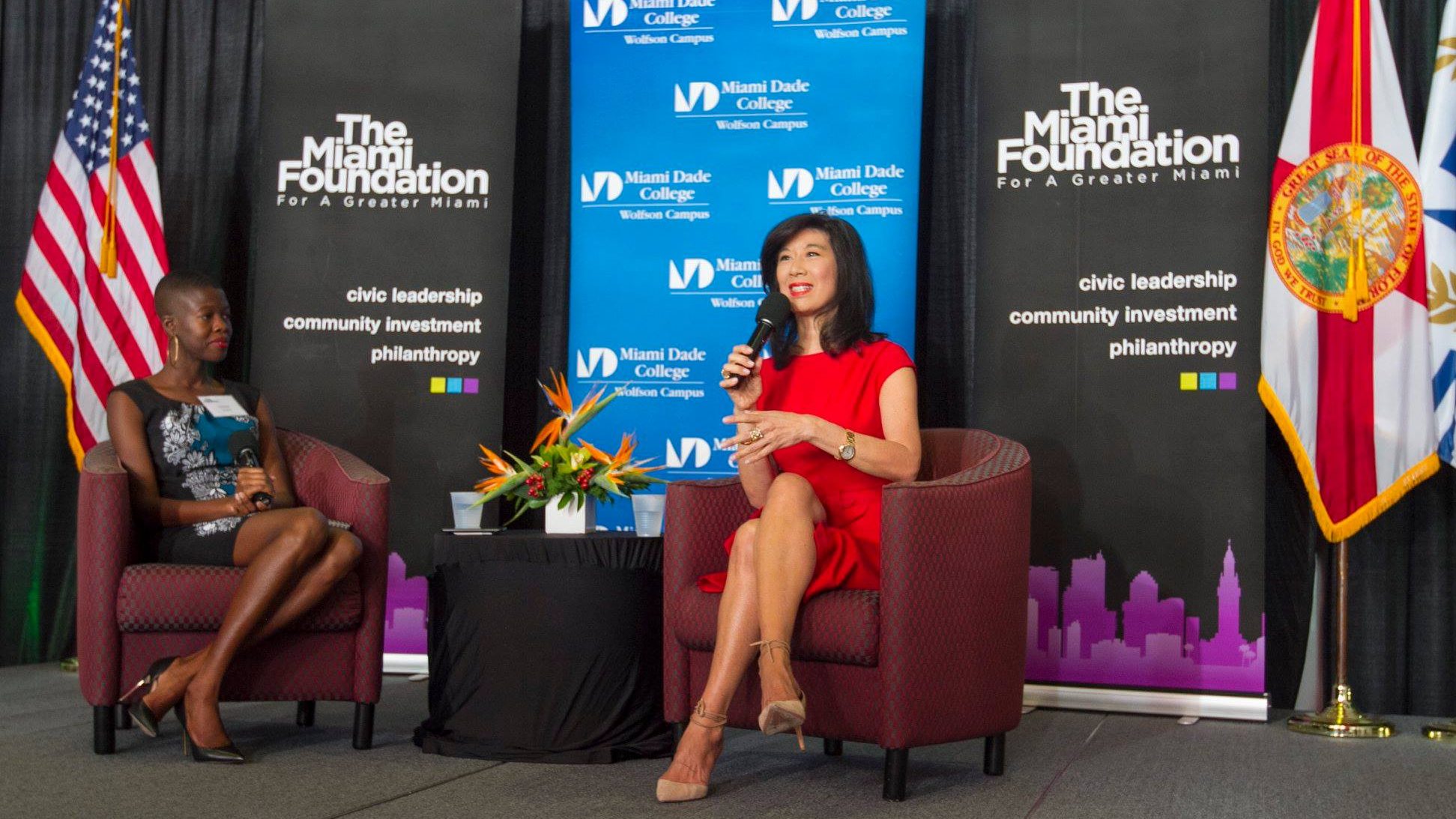 Posted at 15:32h in News by Kate Stein 5 Comments
Share

Andrea is the granddaughter of Chinese immigrants; her family got its start in the United States thanks to a small loan her grandmother received. She is also president and CEO of Grameen America, a nonprofit that provides microloans to low-income women entrepreneurs.

Speaking at The Miami Foundation’s annual Civic Leadership Breakfast on Tuesday at Miami Dade College, Andrea described meeting women who had gone from sleeping on trains to owning hair salons and running their own bakeries. But, she emphasized, it wasn’t just the extra capital that made the difference.

“The peers, the support, the confidence and the training ends up being life-changing,” Andrea said. “The money is a small piece of it.”

Andrea was in conversation with WLRN reporter Nadege Green, who received the 2018 Ruth Shack Leadership Award for her reporting on social justice issues in Miami. They spoke in front of a crowd of more than 100 people, many of whom were past, present – and future – participants and supporters of the Foundation’s Civic Leadership programs such as the Miami Fellows and Miami Leaders.

The idea of developing leaders who support each other was an overarching theme: the Foundation’s president and CEO Javier Alberto Soto described it as some of the Foundation’s most important work.

An emerging local leader who’s doing just that is Chad Bernstein, who accepted the 2019 Ruth Shack Leadership Award at the event. Chad was recognized for his work with Guitars Over Guns, a nonprofit that has reached more than 3,000 students in Miami and Chicago with mentorship and music education. In his remarks, Chad said one way he strives to empower students is by giving them the sense that someone believes in them – just as Miami believed in him when he was developing the organization.

“There’s something really special about having someone who not only helps you find your work-life balance but also your life’s work balance,” Chad said. He thanked his wife, his staff, other graduates of the Foundation’s Miami Fellows program and the Foundation’s president emeritus Ruth Shack, whom he described as “an unapologetic champion of Miami.”

“I’m a beneficiary of everything you’ve built,” Chad said of Ruth.

Guests also heard from Charles Hokanson, a senior vice president with the Helios Education Foundation, which works on improving access to postsecondary education and was a generous supporter of the morning’s event. Both Andrea and Charles emphasized that developing strong leaders strengthens communities.

Andrea noted that, in this respect, Miami is among the most successful of Grameen’s sites; during the 15 months that Grameen has been active in the city, about a thousand local women entrepreneurs have become members. Collectively, they have a 100% loan repayment rate, the best in the country. The Miami Foundation was among the Grameen Miami branch’s earliest supporters.

“There is nothing like the entrepreneurship spirit in Miami,” Andrea remarked. She added that part of what buoys this spirit is, “the philanthropic and civic leadership desire to change not just Miami, but the country.”

Much of the conversation between Andrea and Nadege focused on empowering women, both in boardrooms and in low-income communities. Before she began working in the nonprofit sector, Andrea was CEO of the skin care company Avon; she said hearing about the “Avon ladies” who sold cosmetics to put their kids through school was one of the first times she realized the far-reaching impact of providing financial opportunities to women.

“When a woman earns a dollar, that money goes to children and to the community,” Andrea said. She added that equality of opportunity for women and men, particularly equal access to leadership roles, “is not just a business case, not just an equal right, but it’s better for America. It’s better for the world.”