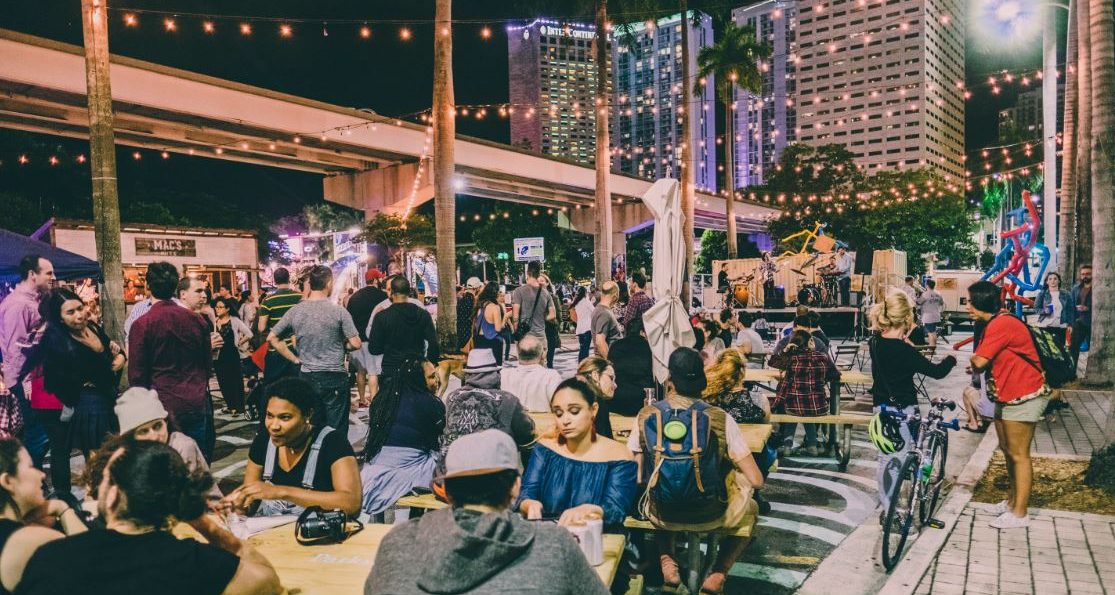 Posted at 20:07h in News by The Miami Foundation 5 Comments
Share

For 20 days in January, more than 20,000 people walked, Ubered, biked and drove to experience a temporary public space called Biscayne Green.  Stretching through blocks of one of Downtown Miami’s busiest thoroughfares, Biscayne Green was an experiment to showcase what Miami could look like if parking lots and other spaces were transformed and activated with engaging festivals, free movie showings and family activities for residents.  The pop-up destination, a 2016 Public Space Challenge winning idea, made headlines and captivated residents, proving that Greater Miami has an appetite for public gathering places where locals can connect and enjoy the outdoors.

In an effort to meet the ever-increasing demand for accessible parks, greenways and public spaces, The Miami Foundation has opened the 2017 Public Space Challenge, a contest for ideas that create, improve or activate local gathering places like parks, playgrounds, sidewalks, basketball courts and plazas in Greater Miami.  Now in its fifth year, the Foundation invests $305,000 to make the top ideas a reality; Challenge partner Target will support winning ideas that promote healthy eating and active play. Anyone can submit an idea – individuals, groups, public agencies, nonprofits or private companies – at ideas.ourmiami.org from March 7th through April 6th.

“Over the past four years, this community has rallied around major park and trail projects like The Underline, Ludlam Trail and Plan Z for Miami.  The Public Space Challenge has helped drive that energy,” said Javier Alberto Soto, president and CEO of The Miami Foundation. “The Foundation’s 50th anniversary year is about fostering the hundreds of ways residents can take ownership of their community and shape the kinds of neighborhoods and local places they want in their hometown. The Challenge puts that power in the hands of every Miamian from South Dade to Aventura.”

The Public Space Challenge has funded activations and permanent projects across the county, including Homestead, Hialeah, Miami Gardens, the Biscayne Boulevard corridor, Wynwood and West Kendall.   The contest has garnered more than 1,400 submissions and over $870,000 has been invested in winning ideas since the Challenge launched in 2013. One Cutler Bay teen created animal-shaped recycling bins to incentivize small children to recycle; musicians, acrobats and theater groups performed countywide in the first outdoor open mic, CULTRA; and Little Havana residents turned a community park into a snow-filled winter scene to bring residents together.

“At Target, we are committed to investing in the communities we serve,” said Alden Kooken, group vice president of South Florida stores.  “As part of our focus on wellness, we support initiatives that promote healthy eating and active play, and are proud to partner with the Public Space Challenge to help our communities continue to thrive.”

This year, The Miami Foundation is also working with the Miami-Dade County Parks, Recreation and Open Spaces Department to connect Challenge ideas to the Open Space Master Plan. The comprehensive, 50-year vision looks to create a seamless, interconnected and sustainable system of parks, public gathering places, trails, waterways, greenways and streets throughout the county.  The Foundation invites applicants to review the plan, and think about how their 2017 ideas fit within it.

“At the Foundation, we’re pushing to get a great park within walking distance of every Miamian,” said Stuart Kennedy, director of program strategy and innovation. “Bringing the Open Space Master Plan to fruition is a big step toward achieving that goal.  We hope the Challenge adds momentum to the effort so we can have a greener, more connected Greater Miami for generations to come.”

To help Challenge participants with planning, submitting and executing their projects, The Miami Foundation will host a series of public workshops with Urban Impact Lab and Design Thinking Miami. A schedule, which includes webinars and workshops held throughout March and April, is available on the idea submission site.  For more information and to submit an idea, visit ideas.ourmiami.org.