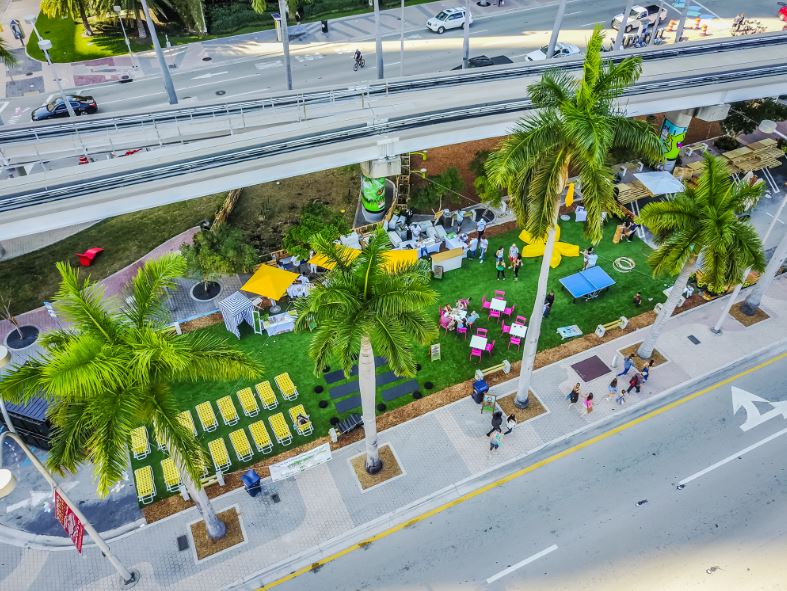 Posted at 19:55h in Blog by Marika Lynch 0 Comments
Share

“This world is but a canvas to our imagination,” Henry David Thoreau wrote, and Public Space Challenge winners have taken him at his word. Where you see an outdoor fountain, they create a roller skating rink. Where you see a busy thoroughfare, they build a pop-up plaza and hold 20 days of events from a puppy brunch to tango lessons.

Vacant land, in addition to underutilized parks and gathering spaces, become fertile ground for big ideas through The Miami Foundation’s Public Space Challenge. Right now, for example, Challenge winners in the Town of Miami Lakes aim to turn a Par 3 golf course into the area’s central park. And in Coral Gables, Bike Walk Coral Gables wants to transform an empty plot of land near downtown into “Galiano Green,” a small park with seating and shade.

Meanwhile, The Vecinos de Riverside Park, a coalition of Little Havana residents and nonprofits, seek to reclaim an existing park for the community. The Vecinos have had to overcome several obstacles to make their idea happen. For one, many people in the community saw the park as “dangerous,” according to a resident survey. Most often, parents described it, in Spanish, as full of “delincuencia,” or all the things kids and teens shouldn’t do.

The Public Space Challenge acted as a catalyst for coming up with ways to transform the park, said Christine Selby, community engagement liaison with The Children’s Trust, which helped convene the group. The group held a brainstorming session and decided to submit an idea to launch a water-fueled events series and convince people that the park could serve as valuable resource and a safe space to play. Their first event, Fiestas de Agua, made it snow in Miami. They trucked in 25 tons of crushed ice, and drew more than 1,200 people, Christine said. 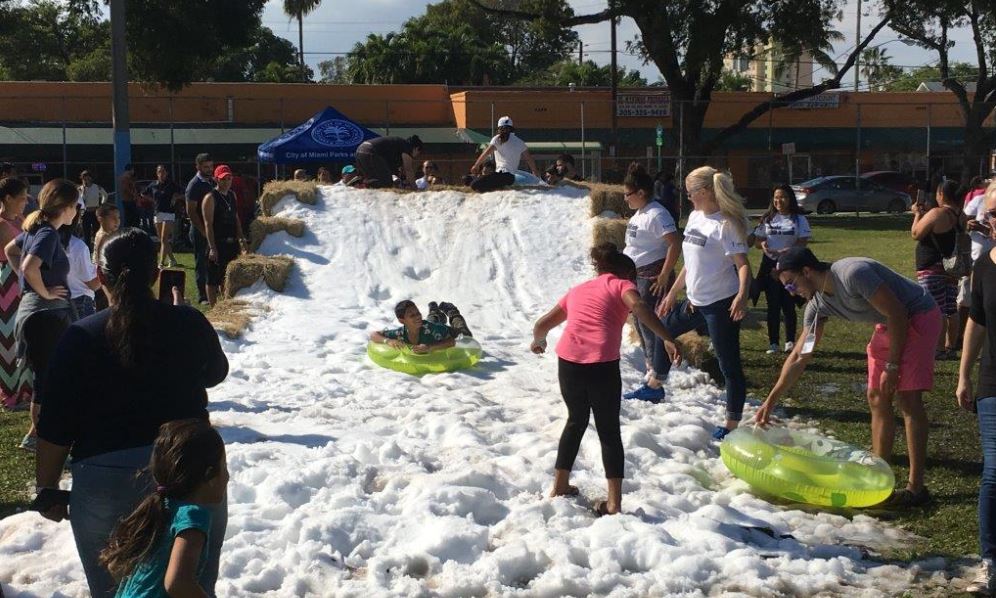 The Vecinos are working with city of Miami parks department to improve lighting and programming at the park, so the change they put in motion lasts. “All these things make an impact,” Christine said. “Big events draw attention to [the park], and create an opportunity for fun.”

For Juan Mullerat’s Public Space Challenge project, he came up with his winning idea while walking down Calle Ocho with his wife and children, ages three and five. The sidewalk was barely wide enough for a stroller, he said. So he thought, why not turn a parking space into “La Terracita,“a parklet for people to gather in traffic-heavy Little Havana?

“We have no open space, and we have way too many roads and infrastructure. If we can turn infrastructure into open space, it’s a win-win,” said Juan, an architect and planner with PlusUrbia Design. The statistics bear out his statement: Miami-Dade County has one park for every 9,862 residents, 77 percent lower rate than the national average.

The family lives a few blocks from Southwest Eighth Street, and would love to see the neighborhood become more pedestrian-friendly, a safe space for residents to walk and play, instead of a place dominated by cars. “What we’re looking for is change, right? A place that is more humanized,” he said. “Turning parking spaces and infrastructure into open space does that.”

Juan is working now to nail down the exact location of La Terracita and to get permission from the appropriate government authorities. When he does, Little Havana will act as his canvas for making us all look at our own city in ways we never thought possible.

See an underutilized space in your neighborhood? Submit your project to the Public Space Challenge by April 6 at ideas.ourmiami.org.

Marika Lynch is a Miami-based writer and communications consultant for foundations and nonprofits.