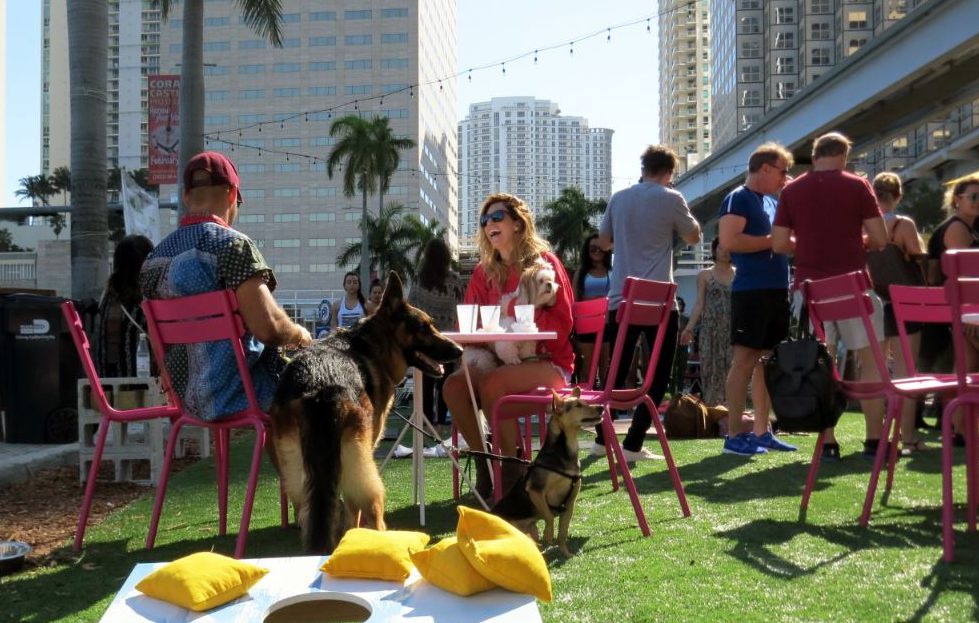 07 Mar OUR CHALLENGE: PARKS EVERY MIAMIAN CAN WALK TO

As I was biking home from work last week along The Underline, one of Greater Miami’s game-changing public space projects, cars stopped at a crosswalk to let me and some people walking cross a busy street in Brickell. Cars slowed to patiently wait, but one driver sped up, cut through the other cars and almost hit a woman already in the crosswalk. Fortunately, everyone was OK, but it left me shaken. On my ride home, I thought about what we could do to make that crossroads of trail and street safer for everyone, whether walking, biking or behind the wheel.

If you ever had a similar moment that prompted you to think of ways your neighborhood could change for the better, we want to hear from you.

The Public Space Challenge turns five this year and we’ll again invest $305,000 in your ideas for improving Greater Miami’s parks, plazas and local gathering places. This year, Target will contribute funding to support winning ideas that encourage healthy eating and active play. Now through April 6, you can submit your ideas at ideas.ourmiami.org.

Over the past five years, the Challenge has supported 70 winners with funding and technical support to help them bring their ideas to life. It’s also helped create the expanded network of public space champions our city needs. The winners have gotten to know one another, help each other, swap ideas and even join with us to advocate for more funding for parks county-wide. They include Juan David Rey, who saw a need to activate parks in the West End and launched a concert series there last weekend, and the city of Hialeah, which is turning an abandoned corner into a shaded spot for transit riders to wait for the train.

To mark the Public Space Challenge’s fifth year, we’re taking it one step further. In addition to funding smaller-scale projects, or portions of larger efforts through the Challenge, we want you to help drive the award-winning Miami-Dade County Open Space Master Plan.  The Foundation is pushing for a great park within walking distance of every Miamian. Let that sink in for a moment – it’s a lofty vision, but it’s possible. We’ve made strides; The Miami Foundation’s Our Miami Report showed that overall park acreage has increased over the past several years. However, the city continues to have one of the lowest levels of parks per capita among its peers, including densely-populated New York City and Chicago. Flash forward to 2025, and Miami-Dade’s population is expected to increase to three million people, putting even more strain on our existing open spaces. We can’t continue to play catch-up. Now is the time to prioritize existing and new public spaces for future generations.

As you plan your Public Space Challenge ideas, use the Open Space Master Plan as a resource. It’s full of detailed information on what already exists in our neighborhoods. You’ll find guiding principles for how to improve and connect Greater Miami’s public spaces – whether it’s our 17 miles of beaches, network of canals and rivers, or trails in Hialeah’s Amelia Earhart Park – and even how to make the streets safer and more welcoming for people to walk or bike to parks. The next step is for county leaders to drill down on the nuts and bolts of making it a reality. Miami-Dade County and all 34 municipalities within it have approved the plan in concept and are looking for ways to both implement and fund it. That’s where your ideas come into play. The leaders behind the Open Space Master Plan will look at the ideas you and your neighbors submit to the Challenge as a way to inform the master plan’s implementation on a block-by-block basis.

At the core of the Public Space Challenge is the belief that you know what’s best for the spaces you inhabit every day and can help improve them. Our goal is to make it easy for anyone to share their idea. To help you prepare, from getting your idea on paper to carrying out your project, we’ll host a webinar and a series of public workshops together with Urban Impact Lab and Design Thinking Miami throughout the county during the Challenge. You can see the list below and RSVP on our Facebook page.

Ready to get started? Check out the Open Space Master Plan online. See how your public space idea might fit in. Then, submit your idea to the Public Space Challenge by April 6 at ideas.ourmiami.org.

We hope you’ll add to the momentum towards a Greater Miami where everyone is within a 10-minute walk to a great public space. Now, get out there and enjoy those parks and outdoor gathering spots that help bring our community together!

Stuart Kennedy is the director of program strategy and innovation at The Miami Foundation.