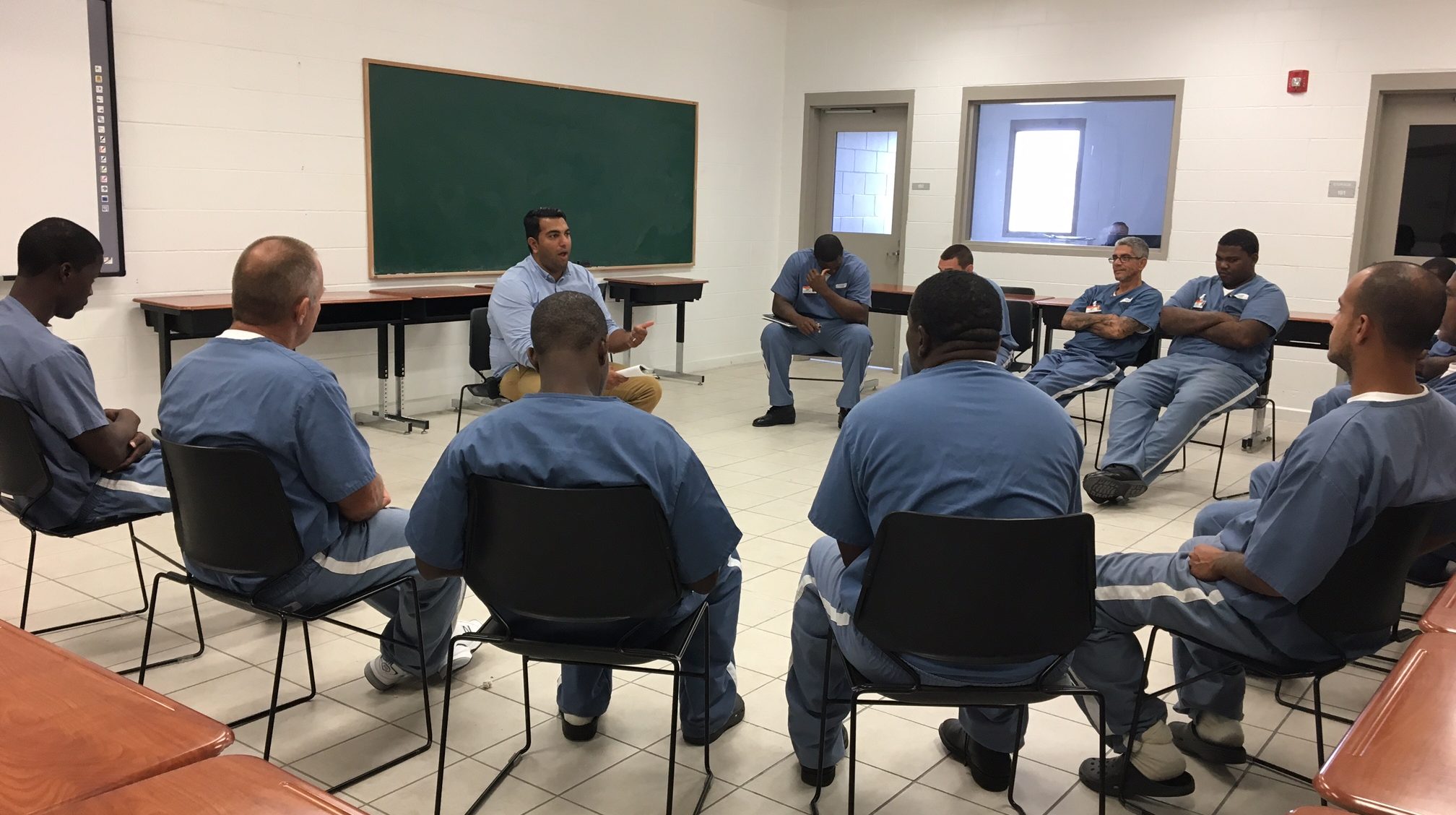 14 Dec MY MIAMI STORY: A CONVERSATION WITH INMATES

Sam Ludington is deputy director, program development and policy of the nonprofit Children of Inmates, which coordinates care and family reunification for Florida children whose parents are incarcerated. As a Miami Fellows alum, he stepped up to host a My Miami Story conversation at the Everglades Re-entry Center, which houses adult male inmates. Sam shared his experience with us.

My Miami story is that of an only child of a Haitian immigrant who grew up in Miami and has been fortunate to have people in his life invest in him. I’m committed to advocating for those in our community who are disenfranchised just as personal advocates have done for me. When the idea to host a My Miami Story conversation for The Miami Foundation at the Everglades Re-entry Center came up, the goal was two-fold: to give voice to a segment of our community who has insight into some of Miami’s greatest challenges, while also reinforcing the idea that these men, all of whom are within 36 months of release, are important members of the Greater Miami community. The spirited conversation that unfolded with the 12 men was one I didn’t expect.

I started by explaining the origins of the My Miami Story initiative and passing out the postcards that had facts about issues facing the community meant to prompt conversation. As I began to share my own Miami story, one of the participants raised his hand and abruptly interrupted me. “What is the point of all this?” he asked. “What are you hoping to achieve by having this conversation with us? Why would I share my personal story with people I don’t even know?”

Admittedly, I was taken aback because I thought the men would appreciate the opportunity to join in the community-wide conversation and share their perspective on some of Miami’s greatest opportunities and challenges. I explained that the initiative was intended to gather different points-of-views on a wide range of topics from throughout the community and that, quite frankly, their voice often wasn’t included at the table.

The participant looked at me directly and responded, “We don’t care about public transportation, climate change or traffic. Our families are struggling to survive, so the last thing that we want to talk about is traffic! Not to mention, nobody cares about what we have to say. When we get out of here we won’t be able to vote or even get a job, so why would anyone care about what we have to say about public transportation?”

The focus of the conversation shifted to post-release employability and the need for additional 21st-century job-readiness training programs in the facilities. A pivotal moment in the conversation came when one of the participants, who is a parent in the Children of Inmates program, interrupted by saying, “Look, we have an opportunity to talk about issues that are impacting our communities and our families directly. You may not be impacted by traffic, public transportation or climate change, but it is directly affecting your families. If we even have the slightest chance of making sure that our kids don’t have to face the same challenges that we did growing up, we should make sure we take advantage of this opportunity.”

I was grateful for his comment. For one, his willingness to remind the others that they had an obligation to try and better the situation became the catalyst for an in-depth and productive conversation on youth gun violence. We talked about the rise of gun violence as a multi-faceted issue – accessibility of guns, poverty, cultural influences and a culture of bullying in schools – and the disproportionate impact on communities of color. Personally, his comment was a source of pride because it’s one of the lessons we reinforce with incarcerated parents at Children of Inmates: that they have an opportunity to ensure their children don’t make similar life choices.

The men expressed remorse for their crimes and most shared a sincere desire to speak with at-risk youth about the mistakes they made in the hopes of demystifying a life of crime and deterrence. One idea involved creating a speaker’s bureau in which released individuals could enroll and get connected with youth organizations and schools. Another entailed providing incentives for inmates post-release for them to share their stories with at-risk youth in inner cities.

Despite a difficult start, the conversation provided a platform for the men to discover the power of their voice, experience the importance of sharing their perspective and see the value of their Miami story. I walked away with a new chapter for my Miami story as I work to organize a summit on youth gun violence inside a correctional institution, where policymakers, elected officials and other stakeholders could hear directly from inmates about policy proposals to address youth gun violence.