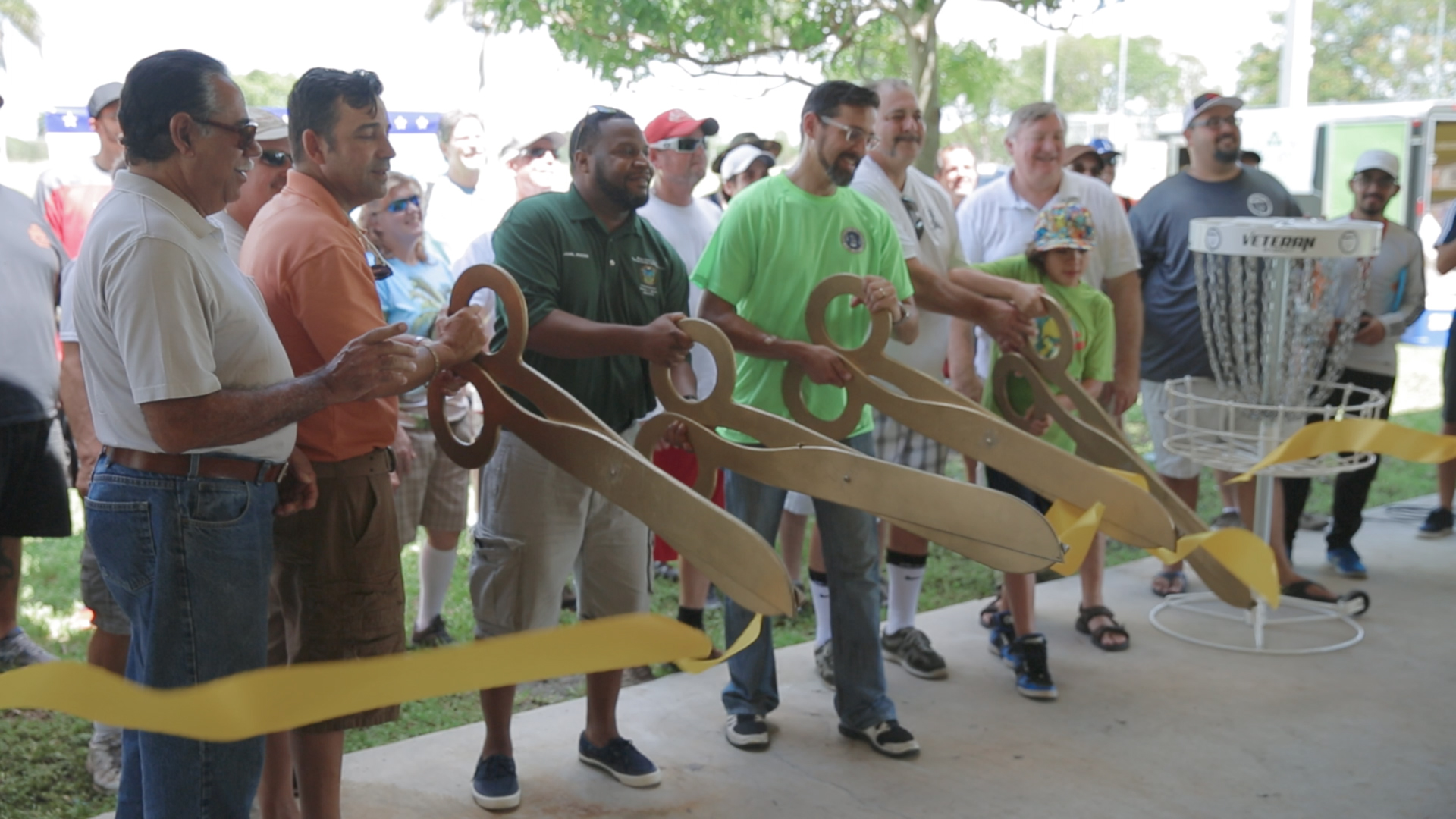 Posted at 14:25h in Blog by The Miami Foundation 0 Comments
Share

David Hazim is a 2015 Public Space Challenge winner. A disc golf enthusiast, he wanted to bring a course to his Homestead neighborhood. David recently shared his story with us about how he used his grant to make the idea happen.

Imagine regular golf but with Frisbees. Instead of putting a ball into a hole, you throw a disc into a metal basket. Like golf, the goal is to make the basket in as few tosses as possible.

Five years ago, a friend took me to play disc golf at Kendall Indian Hammocks Park and I immediately got the bug. I started playing as often as I could – it gave me a reason to turn off the television and computer, and it motivated me to go outside and be active again. I’ve lived in Homestead for over a decade. It’s a fast growing area and I thought that bringing a disc golf course here would help provide an outdoor option for recreation and add to the pride of the community.

I would drive by Homestead Air Reserve Park (HARP) all the time and imagine the possibilities. It had been used for housing military and had a regular golf course at one point, but the vast land was missing activity. So I did something I had never done before: I contacted the Miami-Dade Parks, Recreation and Open Spaces Department and requested that disc golf be added to the master plans for HARP. While they were very receptive, there was a problem – they didn’t have the funding for it.

Two years passed and a friend who knew about my idea forwarded me a link to The Miami Foundation’s 2014 Public Space Challenge, and I applied. I didn’t make the cut that year, but I was determined to make 2015 my year. I studied up on disc golf courses even more and gathered community support for my project by tapping my social networks. The hard work paid off – I won $18,000 to bring a disc golf course to HARP and the Homestead community!

After receiving the award in August 2015, I spent the fall planning and mapping out the course. I went to Orlando and Tampa to check out their courses and played in tournaments. I collaborated online and locally with seasoned disc golf players and course designers. I recruited a graphic design guru among my friends, and I hit the ground running armed with knowledge and talented support.

I was determined to make this work. Stuart Kennedy, director of program strategy and innovation for the Foundation, and Marta Viciedo, founder of Urban Impact Lab and a2013 Public Space Challenge winner, helped me with communications and making connections with important contacts. At the end of January, I presented my plan to the parks department. It took weeks to approve a course design that flowed well while staying out of areas that were set for future development; this past April I finally got the green light to get started.

I was at the park every day working on installations and guiding contractors. I met with management at HARP and started building those relationships. They were essential to completing the project, helping me move equipment and with scheduling and installations for the inauguration. Having access to top park officials also helped me get through design challenges and resolve requests. Many members of the local disc golf community volunteered their time to help – we drilled over 75 holes for signposts and basket sleeves in just one weekend! Once installed, I invited a local disc golf club to come and play for their feedback, and I incorporated their input.

All the hard work came to fruition on June 25 when we unveiled the new disc golf course. About 100 people came, with 60 playing in our inaugural tournament. Many people have shown up to play since then. As part of the project, we also installed a basket at an adjacent elementary school where young students will get exposure to the sport. With the funds I have left from the Public Space Challenge award, I plan to start a local disc golf club and use it help maintain and sustain the course for the long-term.

This is more than just a disc golf course, this is about building community.

We will announce the 2016 Public Space Challenge winners soon. Check out the finalistshere.