05 Dec GET ON BOARD WITH MIAMI’S FIRST-EVER PUBLIC TRANSIT DAY ON DEC. 9TH

Posted at 07:00h in Blog by Sarah Emmons 0 Comments
Share

One of the transportation goals identified in the Our Miami Report is for Miami-Dade residents to have access to more public transit options. Miami Fellows Rebecca Fishman Lipsey and Marta Viciedo will launch Miami’s first-ever Public Transit Day to help spark a movement and conversation to do just that.

What would you do with an extra $6,251 per year? If you live in a two-worker household, that’s the average amount you pay for driving to work rather than taking public transportation. Even with the higher price tag for a car-based commute, many Miamians have not yet made the switch to public transit options. Only 5.3 percent of Miami-Dade residents commute via public transit and per capita ridership falls below rates in most other metropolitan areas, according to data in the 2016 Our Miami Report. When adding in the environmental and health benefits of public transit: what would it take to get more locals to ride public transit?

This is the question that Rebecca Fishman Lipsey, founder of 100 Great Ideas and a Miami Fellow alum (Class VII), and Marta Viciedo, co-founder of Urban Impact Lab and a current Miami Fellows Class IX member, asked themselves earlier this year. Wanting to engage more Miamians in the public transit conversation, they hosted a five-day social media campaign, resulting in more than 400 unique ideas from 1,700 Miamians for how to improve our system.

Participants all agreed: expanding the system and improving connectivity of existing services is critical for increasing sustainability, economic opportunity, quality of life and affordability in our city. In order to drive major investments to strengthen our system, we need our community and elected leaders to commit in a substantial way. 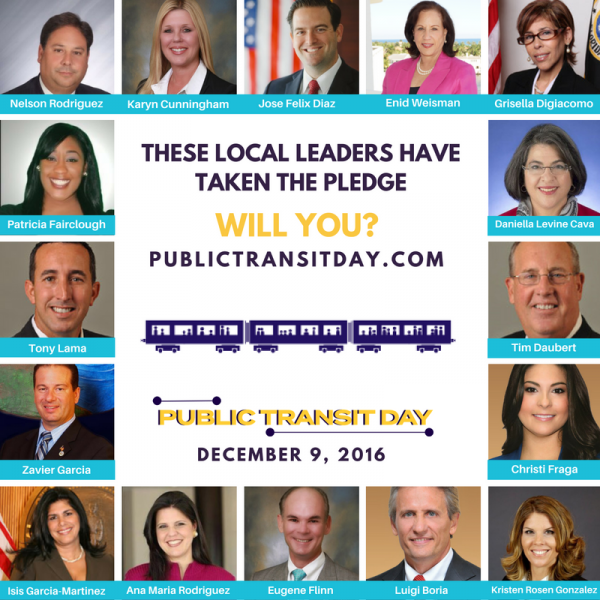 The top idea that came out of the transit-focused ideas campaign was to engage elected officials, community leaders and residents in a period of action where they actually ride public transit themselves to get a hands-on understanding of the issues. On Friday, December 9th, Rebecca and Marta are organizing Greater Miami’s first-ever Public Transit Day to bring the idea to life. This day is all about getting our community leaders and locals to USE transit, learn more about and engage in opportunities for the system, then commit to prioritizing improvements in the coming years. Already, 260+ people have taken the pledge to get on board.

Folks across Greater Miami were so inspired by this initiative, that they’ve joined in to host events, pop-ups, music performances and other surprises at transit stations and attractions all over town, including a community picnic lunch at at The Underline (Brickell Metrorail station) – check out the full list of events and activations here. The fourth annual Buskerfest Miami Street Performance Festival is also happening on the same day in Downtown. You can join in on the public transit conversation using the hashtag #PublicTransitDay.

What started out as a Miami-Dade-focused effort has now expanded to include transit riders and leaders in Broward and Palm Beach. The ultimate goal of Public Transit Day is to highlight the importance of strengthening South Florida’s existing public transportation system, both to improve the economic potential of our city and to improve quality of life for our residents.

All residents are invited to participate. Take the pledge today and ride public transit on December 9th.

Public Transit Day is supported by The Miami Foundation, with additional support from Lyft, The Miami Center for Architecture & Design, Ride2MD, Tri-Rail, Whole Foods and the Health Foundation of South Florida. 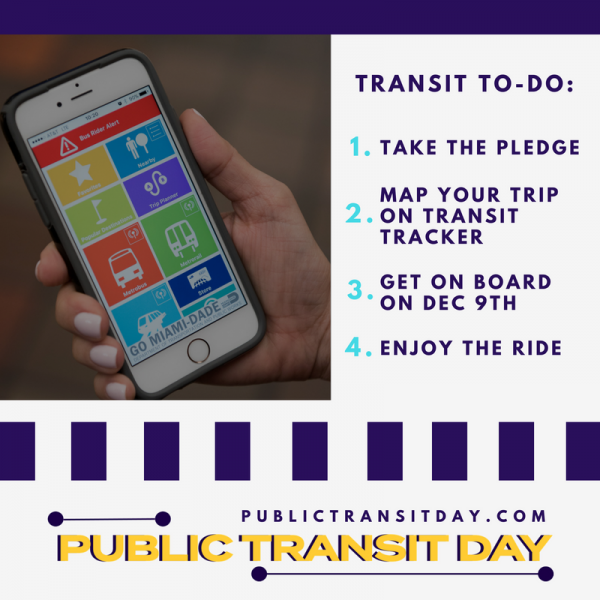