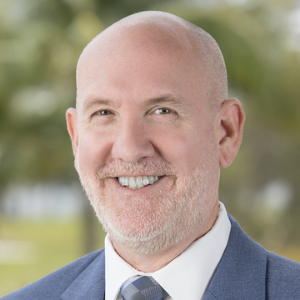 Toby Douthwright is the Chief Financial Officer and Vice President for Finance at The Miami Foundation. He provides oversight and leadership for the Foundation’s financial matters. Working closely with the Audit and Investment Committees, his role is to ensure compliance and fiscal integrity.

For more than two decades, Toby has lead finance and administrative functions for leading foundations and nonprofits. He began his nonprofit experience while working for The Highland Street Foundation, a family foundation located in Massachusetts with assets over $175 million.

He later continued his career as the CFO for the HIV/AIDS and the Climate Initiatives for the William J. Clinton Foundation. In the early years of the Clinton Foundation’s internationally focused programs, Toby was instrumental in establishing financial policies, procedures, and sound fiscal management. He also provided strategic influence for the rapidly growing initiatives with a combined annual budget growing from $15 million to greater than $200 million under his leadership. Responsible for finance and administrative functions spanning more than two dozen countries, Toby had the opportunity to travel to various developing countries and build relationships with people from around the world.

In 2012 Toby transitioned to The Lord’s Place, a social impact agency addressing homelessness in Palm Beach County. As the CFO and later the COO, he led the finance and operations functions helping the agency grow from $4 million annually to over $12 million. Toby managed various funding streams such as federal, state and local government grants, social enterprise revenue, foundation and individual grants, rents, and special events fundraising. In addition to financial oversight, Toby was instrumental in managing and developing the operations to allow the agency to more than double its programs and services, social enterprise businesses, housing and facilities inventory, as well as increasing the number of staff.

Originally from Massachusetts, Toby grew up on Cape Cod where his love for the beach began. He earned his bachelor’s degree from Bridgewater State University and since relocating to South Florida in 2012, he enjoys the warm weather and spending time on the beach year-round with his husband, Dean.

BACK TO STAFF PAGE
The Miami Foundation