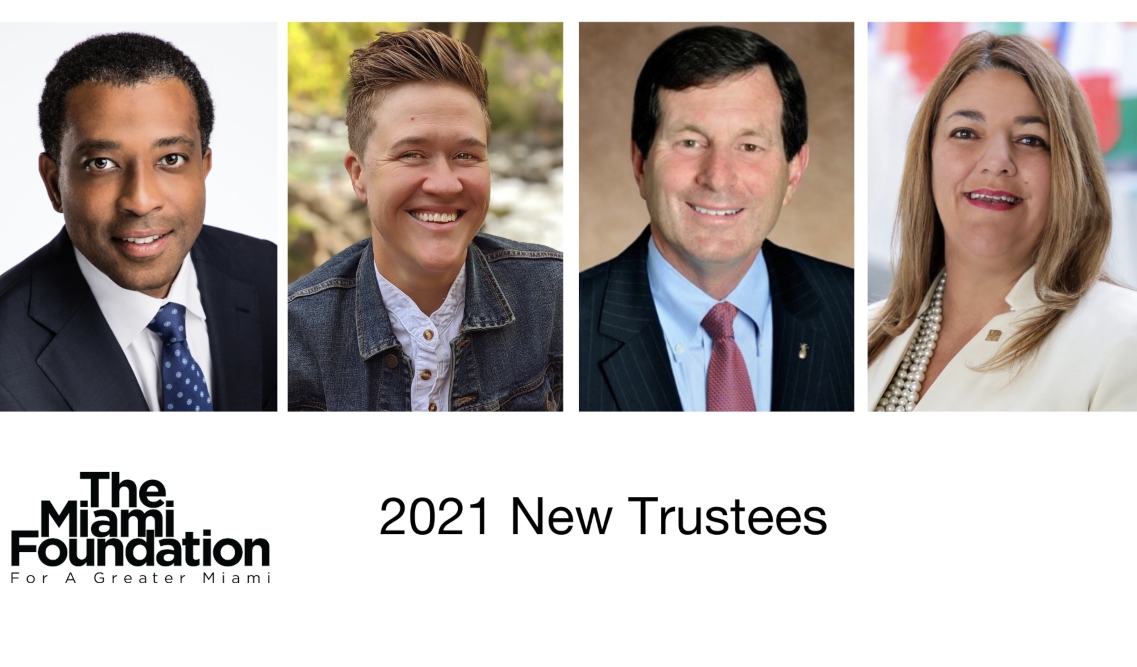 Posted at 16:39h in News by Stephanie Cruz 0 Comments
Share

The Miami Foundation today announced the appointment of four local leaders to its Board of Trustees. The Board of Trustees is responsible for setting strategic direction and measuring the organization’s results.

The new trustees are recognizable executives who are devoted to their community:

“Kareem, Rebekah, Joe and Madeline bring invaluable experience to The Miami Foundation,” said Richard A. Berkowitz, JD, CPA, chairman of the Board of Trustees. “They are living examples of our commitment to building the philanthropic, civic and leadership backbone of Miami. Working with our President and CEO Rebecca Fishman Lipsey and other members of the board, we will continue to respond to Miami’s challenges and opportunities.”

“We are incredibly grateful for the four outstanding community leaders who have joined our Board of Trustees,” said Rebeca Fishman Lipsey, president and CEO of The Miami Foundation. “Their dedication and commitment to the Foundation’s work and to Greater Miami will help us strengthen philanthropy, engagement and leadership in Miami to better serve our community.”

Kareem T. Brantley has twenty years of engineering and real estate investment, development, and construction experience. He is a founding member and managing partner of Bravis Group. In 2021, Brantley joined forces with The Integral Group to form Integral Florida, continuing development work throughout Florida. Brantley was awarded the Rising Star award from the Miami Chamber of Commerce and is a member of the Miami Foundation Fellows Class VIII and South Florida Builder’s Association.

Rebekah Monson serves on several professional and civic boards aimed at improving journalism, technology and civic life. She is co-founder and COO of WhereBy.Us, a platform that helps creators build media businesses, starting with email newsletters such as Miami’s The New Tropic, Seattle’s The Evergrey, Portland’s Bridgeliner, Orlando’s Pulptown and Pittsburgh’s The Incline. Monson also co-founded Code for Miami and Hacks/Hackers Miami.

Joe Natoli is executive vice president and chief administrative officer of Baptist Health South Florida, the largest not-for-profit healthcare system in the region. Prior to joining Baptist Health, Natoli served as senior vice president for business and finance and chief financial officer for the University of Miami. Additionally, Natoli worked for Knight Ridder, Inc., serving as chairman and publisher of the company’s largest newspapers, The Philadelphia Inquirer and Philadelphia Daily News. He was president and publisher of San Jose Mercury News and president of The Miami Herald Publishing Company.

Madeline Pumariega’s love for academics and service excellence began as a student at Miami Dade College. This led into her 20 years of service at MDC in positions of ascending responsibility, culminating in her role as president of the Wolfson Campus. Prior to becoming MDC’s president, she was appointed the first female and first Hispanic chancellor of the Florida College System. She also previously served as president of Take Stock in Children, a statewide non-profit focused on breaking the cycle of poverty by helping students complete their high-school education and advance into post-secondary education and careers.