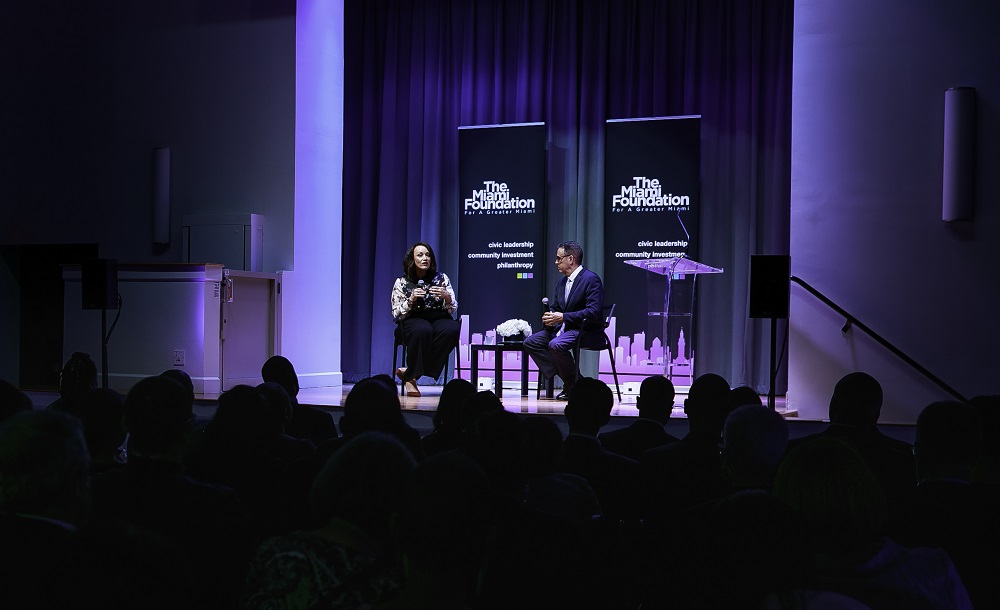 Posted at 16:46h in Blog by Ana Mantica 5 Comments
Share

Philanthropy, in its purest form, is action taken for the love of people.

“We in philanthropy get caught up in the institutional definition of what it means: a distribution of capital. And, yes, capital is labor, investment and money, but it is all based in love … a love for others,” said Tonya Allen, president and CEO of The Skillman Foundation to a crowd of 125+ donors and civic leaders. Tonya was the keynote for the 2019 State of Black Philanthropy at the Overtown Performing Arts Center on February 6th.

The Miami Foundation holds the forum annually every February as part of its celebration of Black History Month. Tonya was in conversation with Andrew Sherry, VP/Communications at Knight Foundation. She played an integral role in architecting Detroit’s ‘Grand Bargain,’ which redefined how philanthropy and government investment can work together to tackle a major civic issue. As they discussed the inside story of what worked in Detroit, Tonya shared strategies local donors could adapt to create change in Greater Miami.

She challenged guests to think about their own individual capital and drove home the message that it doesn’t require a lot of money to be impactful.

As Tonya put it, philanthropy requires, “head, heart, hand and pocket.” In other words, it has to make logical sense, have moral grounding, provide an element of labor and offer an investment of financial capital. She described how The Skillman Foundation and its dozen partners on the Grand Bargain created multiple entry points for people to lend their capital. Some gave money while others lent their influence, their voice and inspired their peers to help.

“Cutting across all spectrums … that’s how you build a coalition to create change,” she said. “As philanthropists and leaders, we must always be working toward building power, exerting power and sharing power.”

During the question and answer period, Tonya was asked to share lessons from the older city of Detroit to a newer city of Miami. Her response: “Build your own and invest in the future of your needs. In Detroit, we didn’t build a legacy of wealth as a community. You, in Miami, as a young city, are in a better position to do that.”

One local example of donors applying these concepts is the Sankofa Sistas Giving Circle, who announced their new charitable effort to empower black women and girls at the start of the evening. The group felt it their duty to give back. So, fueled by a passion to help, they decided to pool their resources as a way to help smaller, grassroots organizations that are doing great work, but may lose out on funding to bigger organizations. (Grant applications are now open through March 1st.)

Melba Pearson, who spoke on the group’s behalf at the event, encouraged donors to do the same for a cause they care about. “We are rich in blessings,” Melba said. “You don’t need millions. You just need hope and desire.”

Echoing Tonya’s and Melba’s advice, the Foundation closed out the evening’s program challenging guests to champion a cause they care about. The Foundation shared 10 easy ways to do so, from opening a personalized Fund to attending nonprofit events and asking elected officials to support causes you want addressed. (Explore more ideas here.)

Ana Mantica is Editorial Officer at The Miami Foundation.