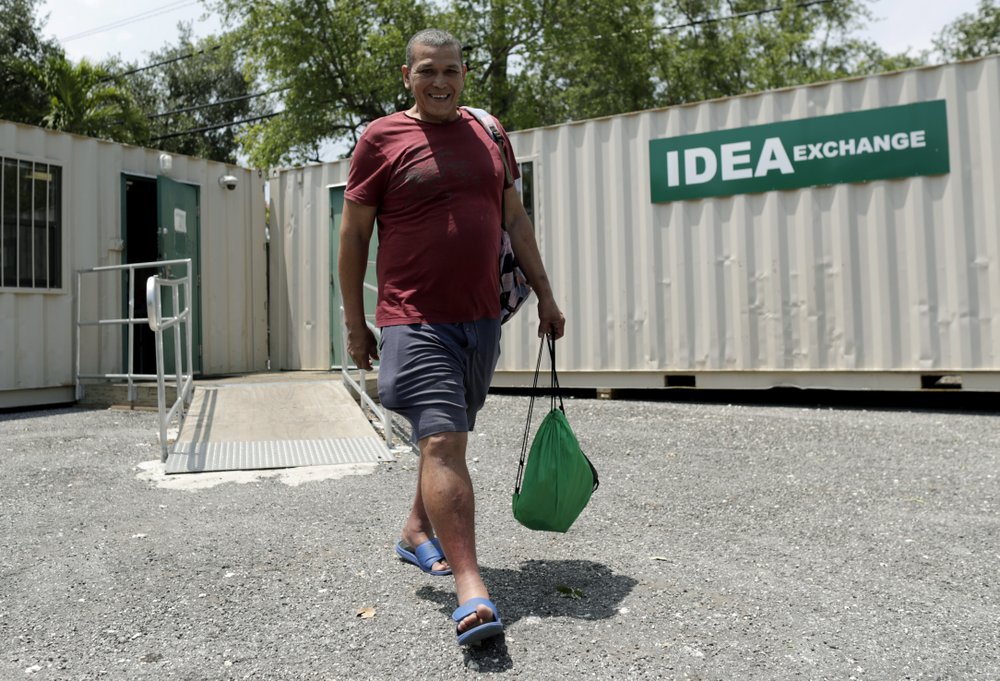 Posted at 14:19h in Blog by Marissa Conrad 4 Comments
Share

Editor’s note: The State Attorney’s Fund for a Safer and Healthier Community aims to reduce substance abuse and impaired driving in Greater Miami. The Fund, created in partnership with the Miami-Dade Office of the State Attorney, 11th Judicial Circuit, supports substance abuse treatment, prevention education and services for victims of human trafficking. Learn how the IDEA Exchange, a two-time grant recipient, used the funding to pilot and grow a needle-exchange program now approved for replication statewide.

Here, anyone can trade in a used syringe for a clean one to avoid sharing blood-borne diseases, no questions asked. Launched as a five-year pilot in 2016 by the University of Miami Miller School of Medicine, IDEA Exchange also provides free HIV testing, delivers overdose reversal medication for drug users and guides clients toward substance use treatment at their own pace. In May, the Florida Senate voted 40-0 to allow other counties to start their own syringe programs. Under SB 366, drug users would be allowed to exchange used needles for clean ones.

Now, IDEA Exchange intends to expand its operations. A close to $50,000 grant from the State Attorney’s Fund for a Safer and Healthier Community at The Miami Foundation is helping them do that. We spoke with IDEA’s program director, David Forrest, Ph.D., about the grant’s impact, what’s next for IDEA, and what the Senate vote means for the future of syringe-exchange programs statewide.

As of 2018, IDEA Exchange had enrolled more than 800 participants, exchanged more than 179,000 syringes and performed more than 600 HIV and 500 HCV tests. How do you get users on board with accepting your help?

We exchange 3,000 to 5,000 syringes every week. We’ve had to build trust. We want people who inject drugs, who are often stigmatized and underserved, to know that they can come to us, exchange their syringes and that we will be there for them.

At the beginning, we can hopefully keep them from sharing syringes and contracting HIV and hepatitis C, and keep them from reusing dirty syringes and acquiring bacterial infections. As we engage with a person over time and build trust, we try to move them toward a greater degree of wellness. If they’re HIV positive or hepatitis C positive, we get them into care. If they’re at risk of overdose, we make sure that they have enough of the nasal spray Narcan, which can reverse an opioid overdose. Then, because we’ve built this trusting relationship, many people come to us when they are ready to go into substance use treatment. The Safer and Healthier Community grant helps us cover the cost of staff doing this intensive work.

How do you move someone into substance use treatment?

People in this life tell us every day, “I’m sick of living this way. I want to stop.” That doesn’t necessarily mean they’re ready to go into substance use treatment. You need to assess when a person is ready. We’re realistic and pragmatic about what’s possible and are continually training our staff on trauma-informed care. We understand this population has a lot of needs, and we work to assess that. It might be that, for years, all we can do with a person is convince them not to share syringes or not to reuse syringes. That’s a huge step forward.

Can you share with us one of your success stories?

We have a middle-aged individual who had been injecting drugs for 40 years and living on the street for about 30 years. He had a family and kids who were in college. For decades, he’d been injecting multiple times a day with heroin. He had remained HIV negative for all of those years. Then, last spring, he became infected with HIV. His girlfriend overdosed at about the same time. He was despondent. We walked him over to the facility that was doing HIV care and sat with him in the waiting room to keep him from leaving.

We started storing his medications at IDEA Exchange. We didn’t pressure him and kept on engaging him. He finally came to us and said he was ready to go into substance use treatment. He completed an eight-month residential treatment program. Now, he has a job. He is becoming one of our peer navigators to help show others how to get through the system, alongside our staff. This is the kind of pathway we see. Often, when we engage a person and have a trusting relationship with them, they come to us and say, “I’m ready to make a change now.” They understand that we’re there for them, even if they fall out of it and go back to using. We keep on supporting them.

It’s now legal for any county in Florida to set up a syringe exchange. What does that mean for the state and for IDEA Exchange?

The state law allows county commissions to pass a resolution to set up a syringe services program within county borders. A number of counties have been contacting us asking how we do what we do and how we pay for it. Other counties will run their own programs, and we might provide technical advice. One of our missions has always been that we are a pilot to try to see how this can work in Florida and share this with other counties in the state. I would like to see us continuing to run a syringe exchange in Miami-Dade and get funding to look at models for how we can engage this population and get them into care.

How can residents get involved?

First, you can advocate for syringe service programs in your county and contact your representative in government to ask them to support health equity for all in Florida. You can also sign up to volunteer at your local program and help educate the public on Florida laws and keep people informed. Lastly, you can donate to your local syringe services program. Although  IDEA Exchange receives funding from numerous grants, the actual syringe purchases are made primarily with funding through donations.

Editor’s note: The Miami Foundation began its involvement in supporting HIV/AIDS prevention in the early 1990s. At that time, needle-exchange programs and their advocates were only beginning to demonstrate their effectiveness and pursue policy change that would legalize this life-saving approach. The Foundation deeply appreciates the work of those who persisted to create legal pilot programs for this work until the day when it would be recognized and broadly approved as a strategy to engage individuals at highest-risk in changing their behaviors, connecting with help for themselves, and becoming part of the solution to ending the spread of HIV.

State Attorney’s Fund for a Safer and Healthier Community