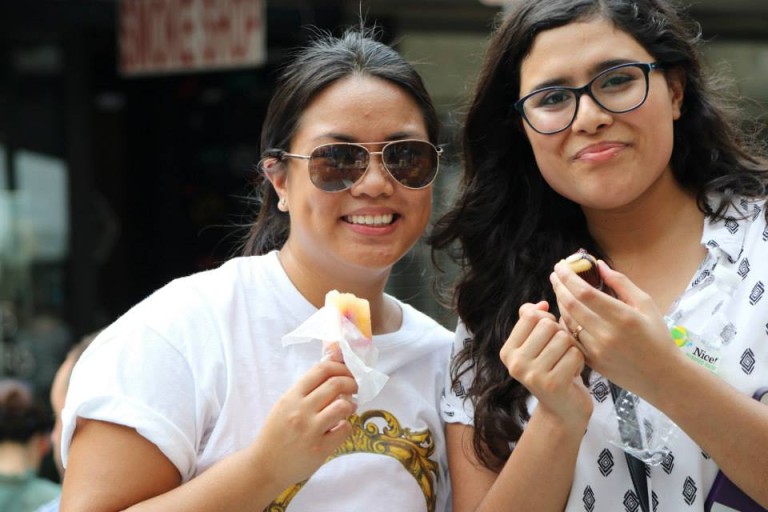 09 Mar HIALEAH SITS DOWN, CHEWS OVER THE FUTURE AT FOODSPARK MIAMI

Posted at 14:59h in Blog by Marika Lynch 0 Comments
Share

The 2016 Public Space Challenge kicks off March 15th, seeking ideas that create, improve or activate Miami-Dade’s public gathering places. To get ready for the launch, we checked in with past winner Naomi Ross about her project FoodSpark Miami, which is hosting an event in Hialeah March 12th.

Greater Miami is a place of incredibly diverse peoples and cultures. But there’s one thing we have in common: we love to eat.

Gather our mishmash of residents around the table to break bread and they just may get to talking, thinking about and connecting on community issues. That’s the idea behind FoodSpark Miami, a 2015 Public Space Challenge winner that will hold a pop-up community dinner and discussion on March 12th aptly named, #QuePasaHialeah.

Over bites donated by local restaurants, from pastelitos de carne to vegan delicacies, the group will come up with four local issues, then break up into small groups to discuss them. Participants will play musical chairs and change topics every 20 minutes. At the end of the night, residents will compare notes with the larger group and FoodSpark will create a report to share with the broader community and civic leaders.

“We want this event to be the spark that helps create a movement in Hialeah,” said founder Naomi Ross.  “A movement of people who care deeply about their city and want to make it an even better place to live.”

The original FoodSpark was conceived in St. Louis, Mo. in 2014 as a way to generate local ideas and connections. Ross thought it would be a perfect project for her larger effort Celebrate Diversity Miami, a community engagement effort to build deeper connections among Miami’s many diverse neighborhoods. In addition to support fromThe Miami Foundation and Baptist Health South Florida through the Challenge, FoodSpark is part of Ross’ K880 Emerging Cities Champion Fellowship, funded by Knight Foundation. The first FoodSpark Miami took place during DWNTWN Art Days last fall, and the next, Ross hopes, will take place in Liberty City.

For the Hialeah event, Ross chose for it to take place at the historic Hialeah Market Station, a Tri-Rail stop in a heavily industrial area that is slated to become a transit oriented development, or a zone that combines housing, offices and stores in a walkable neighborhood within a half-mile of public transit. FoodSpark’s #QuePasaHialeah will show what’s possible for the neighborhood, by transforming a small public plaza and parking lot in front of an abandoned building, with an art display by Art Central Miami, restaurant tables and more.  To plan the event, Ross also connected with a meet-up group of young Hialeah residents who want to better the city, and recruited her friend and resident Maryan Firpo to be the event’s food and volunteer coordinator.

Firpo and the meet-up group think the hot topics of the night will be ways to change the stereotypes about Hialeah and the people who live there, the lack of entertainment and activities for kids, and of course, South Florida’s favorite topic, traffic.
Like Ross, Firpo has a larger vision for the event, and hopes it’s the beginning of more activities and plans for Hialeah, the second-most populous city in Miami-Dade County.

“I want to see Hialeah become a self-sustaining, adaptive and culturally aware area,” said Firpo, emphasizing that she’d like for the city to progress without the negative effects of gentrification.  “FoodSpark is a great platform for Hialeah residents to ignite a grassroots movement, so that it starts with us, and stays with us.”