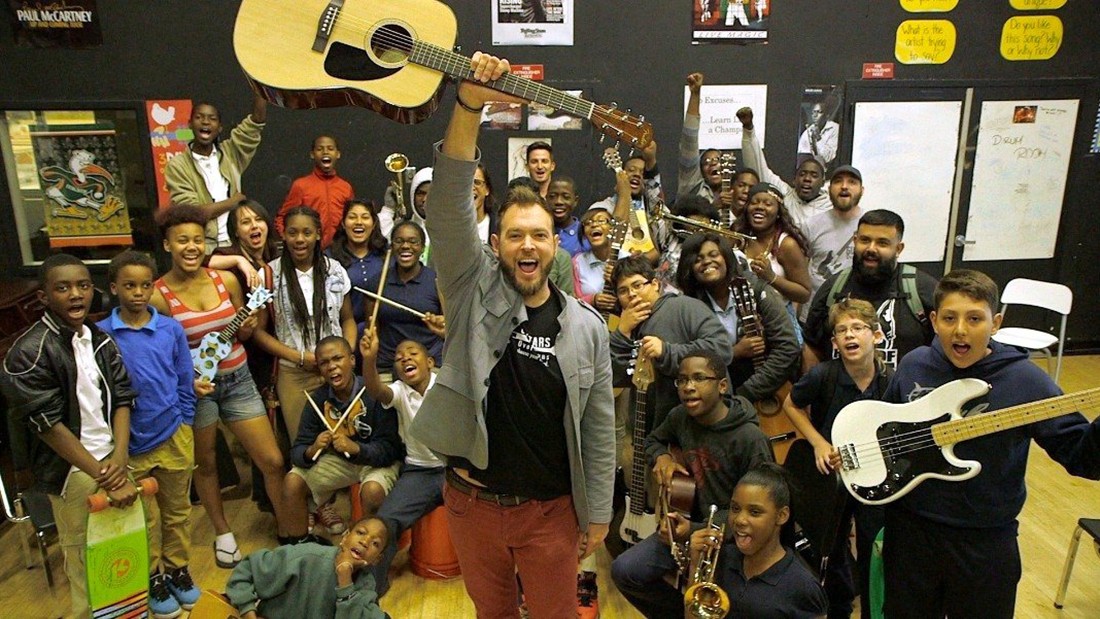 Posted at 21:00h in Blog by Ana Mantica 25 Comments
Share

As a kid, Dr. Chad Bernstein struggled with self-esteem, bullying and a desire to fit in. He found the trombone, and music became the place that he could do that. “Music has always been my identity, even when there didn’t feel like there was anything else in the mirror that I could hold onto,” Chad recalled. “It gave me refuge and a voice.”

It also provided him the opportunity to attend the college of his dreams – the University of Miami Frost School of Music, where he went on to receive his master’s degree and doctorate. Music has taken him all over the world since then, playing and recording with top artists like Pharrell, The Temptations and Pitbull. Moreover, music has allowed him to connect with other people and his community. In Miami, that manifested in an opportunity to co-author the sound of the city with his two bands Suénalo and the Spam Allstars.

Chad and his bandmates visited a juvenile detention center to talk about starting a career in music as a favor to a friend. As they talked, the kids eyes started to glaze over, he said. It wasn’t until the band started playing that the kids tuned in and started listening. This moment and his experience with the impact music had on his life led Chad to formalize the ad-hoc music mentoring project they’d started into the Miami-based nonprofit Guitars Over Guns in 2008.

Today, the organization provides music instruction and mentorship to students in Miami and Chicago. Over the past 10 years, they’ve reached more than 3,000 students. Supported by our Community Grants program, Guitars Over Guns pairs mentors – all of whom are working musicians – with schools to help the students find their voice. Of those students, 99% graduated on time and more than 90% reported improved decision-making skills and self-esteem.

“The best part about our program is watching these kids transform,” Chad told us. Guitars Over Guns mentors students like Junior Pierre. Junior grew up without a father and frequently came close to failing out of school. A teacher encouraged him to join Guitars Over Guns. Junior’s grades and behavior improved. He graduated and received scholarship offers to prestigious music schools. He credits Chad as his mentor: “Chad has seen something in me that I probably would have never seen. Guitars Over Guns has shaped my future desires and what I want to get accomplished,” Junior noted.

Today, Junior is living his dream as a musician playing bass guitar and is one of six Guitars Over Guns alumni working as mentors in the organization. He’s also a voting member on the organization’s board.

“Our children have infinite potential,” Chad said. “This work is a marathon, not a sprint. I have committed my life to this and I’m not slowing down any time soon.”

For his exceptional leadership and dedication, The Miami Foundation will recognize Chad with the 2019 Ruth Shack Leadership Award at the annual Civic Leadership breakfast on April 16th.  Each year, the Ruth Shack Leadership Award honors an individual age 40 or under who reflects the qualities embodied by the Foundation’s President Emeritus, Ruth Shack: a passionate champion for Greater Miami, steadfast ethics, unselfish service and a connector of our diverse community.

Like Ruth, Chad is an unwavering advocate for Miami. He is not afraid to advocate for our youth and, through his work, is redefining what is possible for arts-based youth empowerment. Deborah Margol, former deputy director at the Miami-Dade Department of Cultural Affairs, who nominated Chad for the Award, summed it up well: “Chad uses his art practice to interrupt and reimagine the status quo.”

(Hear more from Chad and the importance of mentorship in this episode of the Innovation City podcast.)

Ana Mantica is editorial officer for The Miami Foundation.