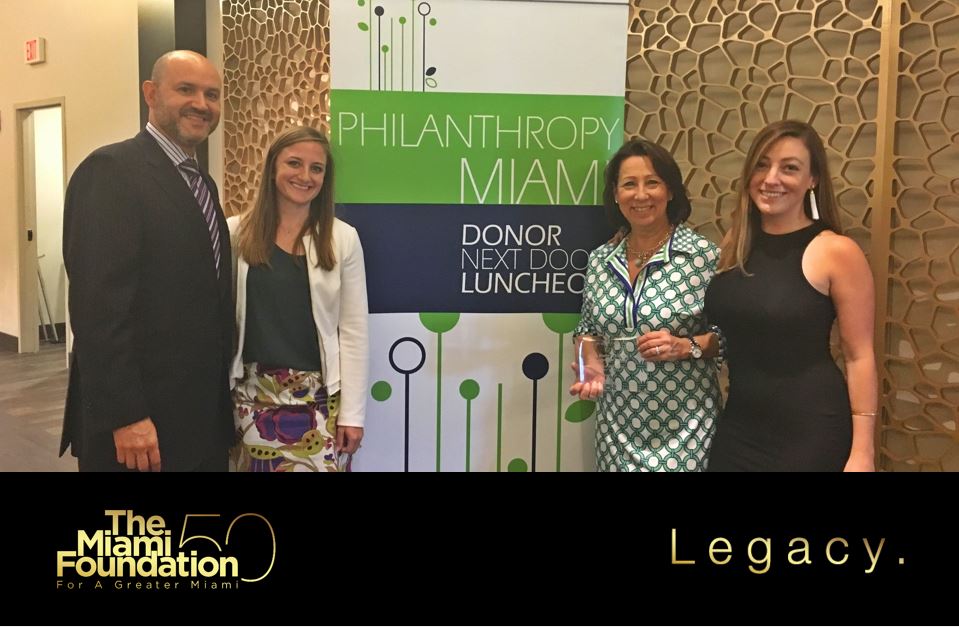 05 May CREATING ACCESS TO EDUCATION OPPORTUNITIES: THE ORTEGA FAMILY FOUNDATION

Editor’s note: During our 50th anniversary year, we are highlighting the donors who make our work possible. The following post was originally published in May 2016 and was edited as part of this series of donor stories.

Families across the country are grappling with ever-increasing tuition, books and related higher-education expenses. Adjusted for inflation, the average annual tuition and fees at a private, four-year institution has nearly doubled over the past 25 years. Four-year public institutions are no different, with the average cost growing from about $3,500 to over $9,000. More than ever, Greater Miami students depend on scholarships and generous donors to make their college aspirations a reality.

Today, his daughter María Elena Wollberg manages the Foundation. She and her family established The Ortega Foundation Scholarship Program at The Miami Foundation to invest in Miami-Dade County’s high-achieving, college-bound seniors. The program supports students like Michele Wu.

While at Miami Lakes Educational Center in the Cambridge Engineering program, Michele was involved in the Technology Student Association and student government. She participated in a summer tech immersion program, which inspired her to co-found a Girls Who Code club at her school. Last fall, Michele began at the University of Florida to pursue a degree in computer science engineering.

Last year, María Elena and her family awarded Michele and 18 academically accomplished students like her four-year, $7,000 renewable scholarships, totaling $133,000. In 2015, 17 deserving students were also awarded over $100,000 in scholarships thanks to the Ortega family’s generosity. The program ensures that Mr. Ortega Bonet’s legacy of giving will indeed continue to impact the lives of students like Michele, and hundreds of other Greater Miami youth for years to come.

In honor of the Ortega family’s outstanding philanthropic efforts and dedication to our community, The Miami Foundation celebrated María Elena and The Ortega Foundation as our 2016 honoree at the 19th Annual Donor Next Door Luncheon. The event celebrated the philanthropy of more than 35 individuals, families, foundations and corporations that donate time and money to support the work of nonprofits in the arts, education and social services.

Applications for 2017 scholarship programs are now open. For guidelines and to apply, click here.

Ana Mantica is editorial officer of The Miami Foundation.