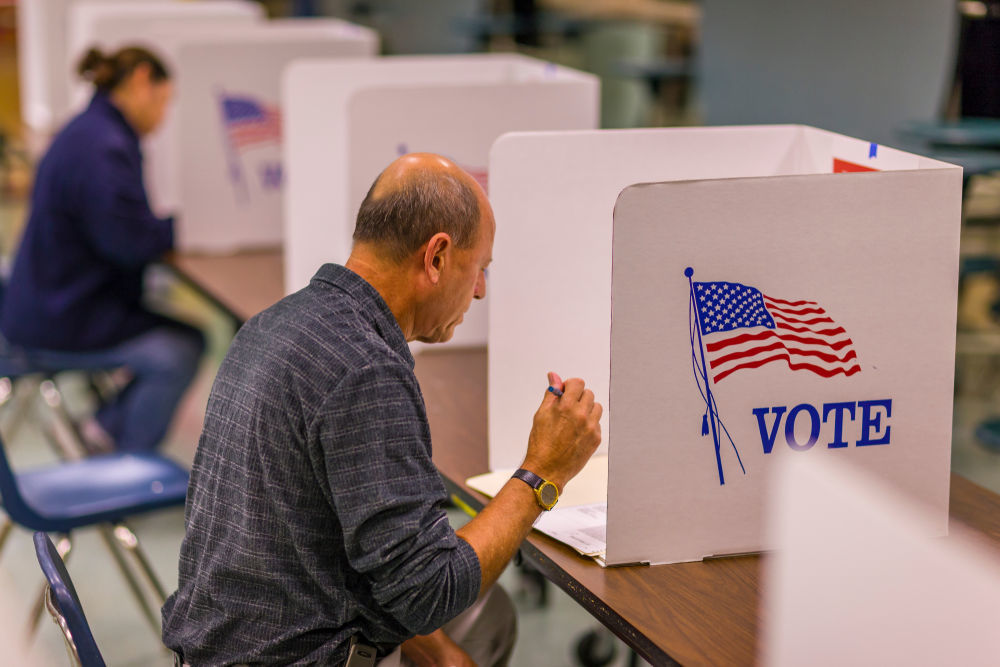 Posted at 20:36h in Blog by Dawn Shirreffs 10 Comments
Share

Editorial Note: 2018 is a big election year, with important local contests and November midterms. This is part two in a three-part series by Dawn Shirreffs, director of public affairs, helping voters better understand the issues and how to make your voice heard.

Florida has more ways to change the constitution than any other state in the country. There are five of them. Three are done by lawmakers up in Tallahassee, but there are two ways citizens can do it:

– The people have the power to amend the Florida Constitution through an initiative petition, which requires a whole lot of signatures throughout the state. It’s pretty daunting but an incredible win if it makes it to the ballot for a vote.

– Florida’s Constitution Revision Commission, made up of folks appointed by the legislature, review the state constitution every 20 years. They get input from the public at meetings around the state, then propose changes that the public vote on.

Ballot items need 60 percent of voters to approve them in order to pass. This year, both the Florida legislature and Constitutional Revision Commission had a lot of ideas so, on November 6th, you’ll see a TON of amendments on your ballot.

We’ll break them down here and share what they mean, so you know what you’re voting on and why it matters. Many of the proposed amendments (7 out of 13) have been challenged in the courts. (Miami Herald and WLRN are keeping track of updates as decisions are made.)

This increases the amount that a person can exempt from property taxes on their primary home, except for properties that help for schools. The measure would increase the homestead exemption from $50,000 to $75,000, but the additional $25,000 exemption would apply only to homes with an assessed value of $100,000 or more.
Supporters say: It makes buying a home more affordable. Government can generate more revenue on other taxes to make up for it.
Critics say: It would save a small subset of homeowners a couple hundred bucks, but cost Miami Dade County government $76 million a year, limiting services across the community.

It caps the assessment of property value at 10 percent for any house someone isn’t living in, like a rental property, second home or vacant land. Voters approved this in 2009, but left an option for us to reconsider in 2018.
Supporters say: This is already in place and the amendment is just making it permanent.
Critics say: Putting this in the constitution permanently limits it as an option to generate funds available for government services in the future when we may need more flexibility.

This amendment would mean casino gambling can only be approved through a citizen initiative process and that the state legislature can’t authorize casino gambling through statute by putting it directly on a ballot.
Supporters say: Citizens should be in control of which casinos can open and operate gambling in the state.
Critics say: Legislators won’t have any real control in regulating the opening of casinos for gambling.

Amendment 4: Voting Restoration Amendment
This amendment would automatically restore the right to vote for people with prior felony convictions after they complete their sentence UNLESS convicted of murder or a felony sexual offense. Right now, people with prior felonies can’t vote unless a state board restores their voting rights on an individual basis.
Supporters say: The current process takes almost a decade for someone to be able to vote after they’ve served their time. We should make it easier for people who have served their time to re-enter civil society and vote.
Critics say: It’s too broad. Each person’s case is different and should be considered individually.

Amendment 5: Super-majority Vote Required to Impose, Authorize or Raise State Taxes or Fees
This would make it harder to raise taxes and harder for lawmakers to insert a clause that would raise taxes in another, unrelated bill. It means that in order to raise any state taxes, there would need to be a two-thirds vote of each house of the state legislature. It doesn’t apply to rules for local taxes like those implemented by a county, municipality, school board or special district.
Supporters say: We should make it more difficult to raise taxes than cut them. A simple majority makes it too easy to raise residents’ state taxes.
Critics say: This allows outdated and wasteful tax breaks to be protected by lobbyists while forcing lawmakers to hike fees, tuition and other levies on citizens to generate revenue, especially in a recession.

Amendment 6: Rights of Crime Victims; Judges
There are three constitutional amendments bundled into one for this one. You’re voting on:
1) Explicitly list and define the rights of crime victims.
2) Increase the judicial retirement age from 70 to 75.
3) Prohibit courts from deferring to a government agency’s interpretation of a law.
Supporters say: It clearly outlines a victim’s rights. Many states require judges to step down by 70, but those people can perform their duties just fine and should be allowed to continue to serve. A court should interpret the laws themselves rather than deferring to another agency’s interpretation.
Critics say: There are way too many laws that are unrelated being bundled together but that victims’ rights clauses already exist and create a lot of unnecessary paperwork. Age limits help get rid of bad judges and judges may need to defer to an agency’s interpretation in some cases.

Amendment 7: First Responder and Military Member Survivor Benefits; Public Colleges and Universities
You’re also voting on three different items in this one:
1) Provide benefits, including education, to the families of first responders and military members who were killed on duty.
2) Require a supermajority vote. Two-thirds vote for raising university fees (not including tuition) regulated by the state. Right now, it’s a simple majority.
3) Establish community colleges in the constitution. Right now public universities are already established in the constitution; this adds community colleges.
Supporters say: Survivors of first responders should get death benefits and a reduction in college fees. It should be more difficult to raise college fees. Community colleges should be governed by the state in an organized fashion, just like universities are.
Critics say: These should be individual votes and not bundled together. It’s not clear how these would help or hurt community colleges and universities or what benefits are being proposed for military and first responder families that don’t currently exist.

Amendment 8: School Board Term Limits and Duties; Public Schools
Again there are three proposals wrapped into one here. They are:
1) Establish term limits of two, four-year terms for school board members. If someone has served more than eight consecutive years on a school board, they can’t be on the ballot.
2) Limit a school boards’ authority to public schools established by the district school board. For charter schools, lab schools and other schools not established by the school board, that can be run by a different institution.
3) Explicitly require that civics be taught in K-12 schools.
Supporters say: It allows for innovation and ingenuity in education, which needs to be updated.
Critics say: These should be individual votes. Also part two would mean that private individuals could establish a charter school in their county without any real regulation.

Amendment 9: Prohibits Offshore Oil and Gas Drilling; Prohibits Vaping in Enclosed Indoor Workplaces
This one combines two items that seem odd to couple together:
1) Prohibit drilling of oil or natural gas in state waters (generally three miles from the coastline).
2) Ban vaping in indoor workspaces.
Supporters say: Drilling in state waters is a threat to our tourism economy, environment and health and should not be allowed. Coworkers and others shouldn’t be exposed to chemicals and possibly carcinogens released into the air by e-cigarettes or “vaping.”
Critics say: Some assert more data is needed to determine the constituents in e-cigarette aerosols and the potential risks of secondhand exposure while others indicate oil and gas exploration in state waters is important to growing the economy.

Amendment 10: State and Local Government Structure and Operation
This one is rather complicated; the amendment bundles together four different proposals:
1) Start the state’s legislative session in January rather than in March.
2) Create a state office of domestic security and counter-terrorism.
3) Establish the state veterans affairs department in the constitution.
4) Require county-level offices to be elected and prevent a state from abolishing the position.
Supporters say: Changing the dates of session could allow lawmakers to enjoy spring break with their families. Counterterrorism and domestic security offices belong in the constitution for long-term protection. Some places already elect countywide positions, but right now, Miami-Dade appoints its sheriff, so he or she is not accountable to the people.
Critics say: It would cost taxpayers more money to move the legislative session to January with no benefit to the public. A chief of domestic security to assess and coordinate statewide efforts to prepare for, prevent, protect, mitigate, respond to and recover from acts of terrorism already exists. The Florida Department of Veterans Affairs already exists. Requiring elected county-level positions, like sheriffs, challenges home rule and could make law enforcement too political.

Amendment 11: Property Rights; Removal of Obsolete Provision; Criminal Statutes
This is a bill that works on revising some language in the constitution.
1) It repeals a provision that prohibits foreign-born persons who can’t get citizenship from owning, inheriting or disposing property;
2) It repeals a provision that says high-speed ground transportation needs to be developed in Florida.
3) It deletes words in the state’s Savings Clause which says that when a person has committed a crime, they are charged according to what the law was when they committed the crime.
Supporters say: Non-citizens should not be restricted from property rights. The high-speed transportation clause is outdated anyway because it was already repealed, it’s just that the language is still there. The last clause would have a big impact on inmates and help reduce sentences.
Critics say: These are three separate issues and should be different amendments. Foreign investors drive up real estate prices. A high-speed rail is important for Florida. Sentencing should follow the law in place when the crime was committed.

Amendment 12: Lobbying and Abuse of Office by Public Officers
This would prohibit a public official from lobbying for pay during their term in office. They also wouldn’t be able to lobby for six years after leaving office or be allowed to use their public office for “disproportionate” benefits.
Supporters say: This would expand the rules for ethics in lobbying and public office to prohibit abuse of a public position by public officers and employees to obtain a personal benefit
Critics say: The current laws on the books about lobbying are enough and we don’t need to add more.

Amendment 13: Ends Dog Racing
This amendment phases out commercial dog racing in connection with wagering by 2020. Other gaming activities are not affected.
Supporters say: Greyhound racing is cruel and should be banned in Florida, as in other states.
Critics say: Greyhounds are dogs made for racing and are great athletes. Plus, there would be $1 million lost in taxes and revenues. Leave the law as it is.

I know that was intense, but one more thing: If you haven’t already registered to vote in the November elections, the deadline to is October 9th. You can register to vote online or by mail.

You may also like:
Not just a “primary:” Why Aug. 28th matters to Miami voters