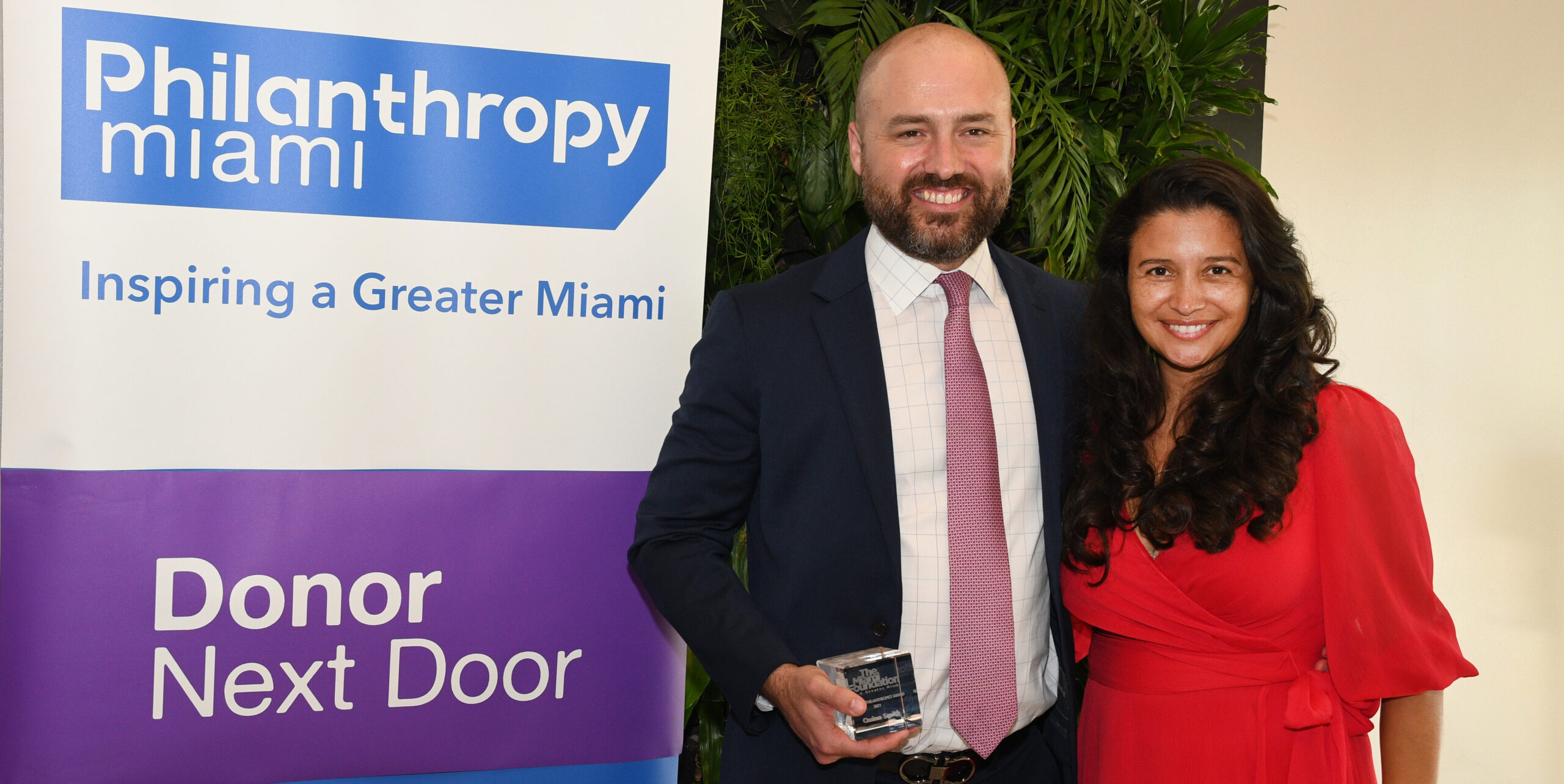 Posted at 06:00h in Blog by Quinn Smith 0 Comments
Share

Pictured (L to R): Quinn Smith with his wife, Lady Smith, at the PhilanthropyMiami Donor Next Door 2021 event.

Editor’s Note: The Miami Foundation’s Emerging Philanthropist Award annually celebrates a 40-or-under donor who uses charitable giving to drive measurable results around a local cause, broadly improve the lives of Greater Miamians, and encourage others to give. We are pleased to name Quinn Smith as our 2021 honoree! Below are his remarks given at the PhilanthropyMiami Donor Next Door luncheon where he accepted the award.

In my bio for this award, I told part of the story that started my commitment to philanthropy. Today, I am going to tell you the rest.

I was in New York City on business, and I managed to catch my friend and mentor, Purvi Shah, with some free time if I could make it to her office on Broadway and Bond Street. I made time. The office was small and windowless, some bright paint on the walls and an exposed ceiling, but otherwise non-descript.

I like to talk to Purvi because she makes me feel uncomfortable. It’s not that she says awkward things. Rather, she holds me to the truth of my convictions, the kinds of words that appear in our country’s founding documents but often disappear into a dead letter.

In a little corner of a workspace, Purvi first asked what I was doing for the people we served, which did not cause me to shift in my seat. After all, since I was a child, my parents had taught me to donate money to help poor people. My siblings and I had to donate 10% of our birthday and Christmas money, a practice that continued with my lawn mowing business I started at the age of 9. But the next question was different: what are you doing to change the power structure?

Purvi and I met when I was at the University of Miami Law School, and I had helped her in representing community organizations, small non-profits based in Overtown and Liberty City, whose members and leadership were almost exclusively Black and brown people. This was the front line of the fight for change deeper than an immediate need. These were the people who lived with the daily consequences of decisions that prioritized wealthy people. Things like luxury towers instead of affordable and workforce housing. Interstate highways through the neighborhood instead of public transportation alongside it. Low wage service jobs without benefits or raises.

Purvi asked me the second question, the one about power structures, in the context of the people and organizations she had introduce me to, the “work,” as we often referred to it. Purvi was speaking to a different reason to engage in philanthropy.

Based on that second question, my outlook shifted. I introduced myself to Willie Logan, the President and CEO of the Opa-Locka Community Development Corporation, because he had a vision for Opa-Locka and North Miami that involved building communities in Black neighborhoods that bring affordable housing, good jobs, childcare, direct cash assistance, small business loans and coaching, art primarily from the African diaspora, and advocacy. Lucky for me, Dr. Logan shared a beer with me and showed me the work that the OLCDC is doing. That work is a small part of reversing the decades, if not centuries, of neglect and abuse. We are building or preserving thousands of units of low-income and workforce housing even though, as a non-profit, the bidding procedures make it almost impossible for us to qualify for county surtax dollars, one of the primary drivers of funding. We are fighting back when our partners do not want to honor their commitments or treat us as equals. We are stepping in where the government cannot or does not want to.

At its best, this is what philanthropy can do. I see it in the Opa-Locka CDC and the other non-profits my wife and I support. That second question re-oriented my life, and I am so proud that Opa-Locka CDC nominated me for this award. Thank you to the Miami Foundation and Philanthropy Miami its commitment to “addressing and eradicating racism in all of its forms in Greater Miami.” Focusing on the work of the Opa-Locka CDC helps us achieve us this goal.

In closing, may we all look for people who make us uncomfortable, who call us to live up to the magnificent ideals upon which this country was founded. May we commit ourselves to justice and orient our philanthropy accordingly. After all, none of us can be held responsible for the wrongs of our ancestors. But if today we choose not to do the right and necessary thing, that burden we own.